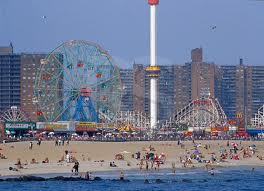 Those of us who love Coney Island can breathe a sigh of relief. Amusement giant Zamperla has just finished a deal that will keep the pizzazz on Coney Island while ensuring that the homegrown Brooklyn businesses stay in place. They had been thinking about glitzing up the strip with more out-of-town businesses, but have, fortunately, done away with that idea.

“We understand that Coney Island is not Miami Beach. We want to keep what is already working there.”

Soon, you’ll be able to eat at Tom’s Restaurant, which is opening an offshoot on the Boardwalk after signing an eight-year lease on Friday with Zamperla. As Tom’s owner Jimmy Kokotas said of the 75 year old diner, “[There’s] the tradition and history of Coney Island, and we have a rich tradition and history of our own. Bringing them both together, I think it’s going to be great.”

Some Are Staying, Some Are Going

Ruby’s Bar and Paul’s Daughter will also be staying; although Zamperla had spent a great deal of effort trying to evict them. Others that just signed new eight-year leases include Lola Staar boutique, Coney Island Beach Shop and Nathan’s. A few businesses did get the boot, however, and those include Beer Island, Cha Cha’s bar, Coney Island Souvenirs, Grillhouse, and Gryo Corner.

The Brooklyn community has definitely won a hard-earned battle here. Zamperla had planned to turn the property over to Miami Beach hotel and restaurant operators to put in high-end attractions, but the stink they received from the community helped to stop the deal.

“We are learning a little bit. After a year and a half, we understand how important Coney Island is to the Brooklyn community. We are trying to keep Brooklyn in Coney Island.”