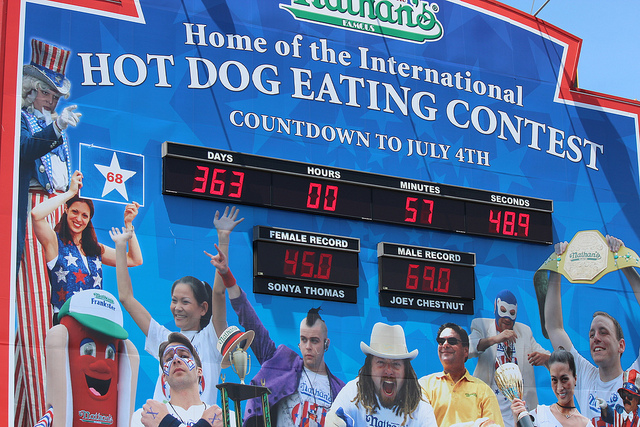 Stonie only won by two dogs, but he still had to devour an unbelievable 62 hot dogs with their buns in a lightning time of only ten minutes. To think second place went to someone that could actually eat 60 hot dogs and buns in ten minutes is mind-boggling.

The contest was first established on July 4, 1916 by Nathan’s one of America’s most well-known seller of hot dogs. Back then the winner only had to consume 13 dogs in ten minutes. The contest was always held in Coney Island, one of the world’s most famous locales for amusement parks, one hundred years ago, and today as well. Today the contest has elements of a sporting event, with live coverage on television, and a female division as well. Miki Sudo, the women’s division champion, wolfed down 38 hot dogs. The second place female contest winner, Sonya Thomas, a former champion who is an eating-contest veteran, only managed to swallow 31 hot dogs in the same amount of time.
Aside from the ESPN broadcast, thousands of spectators came to observe the contest in person.

“I trained hard for this” Stonie explained. “We don’t just go up there and eat hot dogs. We practice for this. We prepare our bodies.”

Anyone who regurgitates is automatically disqualified.