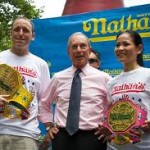 You can’t find a more authentic 4th of July activity than this. Yesterday, the Nathan’s Famous Hot Dog Eating Contest swept Coney Island with fun and excitement. Joey Chestnut took the title again, winning his sixth annual title as the fastest frank eater around. He managed to consume 68 hot dogs in 10 minutes — or approximately one every 8.8 seconds.

With this sixth win under his belt, he is tied with Takeru Kobayashi for the most wins in the competition’s history. Joey “Jaws” Chestnut walked away with another belt, and with a nice $10,000 prize under his belt.   The runner up, Tim Janus, didn’t even come close, managing to put down only 52 dogs.

Humoring all around, Chestnut further explained,

“Once I get a rhythm going, I can jump those hot dogs down” said Chestnut. “How could this get old? I feel great.”

Not to be left out, there was a women’s title as well. Sonya (Black Widow) Thomas took that title for the second consecutive time, eating her share of 45 hot dogs in 10 minutes (with the buns of course).   With only 100 pounds on her body, and draped in an American flog, Thomas proudly shattered her championship last year of eating 40 hot dogs.

As the Bleacher Report wrote in its cheeky recount of the Nathan’s Hot Dog Eating Contest 2012, “Happy Fourth of July everyone! Is there any better way to celebrate our independence than with a little good old-fashioned gluttony and and American excess? If there is, I don’t know what it could be. For the second year, the men and women will compete in separate competitions at the Nation’s Hot Dog Eating Contest, leaving two competitors $10,000 richer after the event. ”

Certainly, Thomas and Chestnut made their mothers, and their country, proud yesterday.