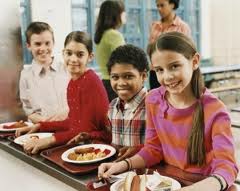 Michelle Obama has been promoting better eating habits for Americans of all ages, but she has placed a special emphasis on good nutrition for children. In New York apparently, we are way ahead of the times. It has been about 6 or 7 years since schools in New York have offered school lunches to kids as an eating experience rather than as just a   government service. In many ways the philosophy treats the kids as if they are customers in a restaurant.

Jorge Collazo, the executive chef of the Department of Education explains how the food service respects the kid’s choices. “If you have a restaurant you don’t keep offering dishes your customers don’t buy.” So mystery meat and boiled noodles in ketchup have been expelled from the menu.   But better tasting food was only the first part of the challenge.

New York schools get an A when it comes to the level of nutrition offered in school cafeterias. Whole wheat pasta, salad bars, low sodium entrees and fresh fruit feature prominently, and Michelle Obama would be happy to see that the students are never offered fried foods, trans-fats, or artificial ingredients.

Eric Goldstein is the executive at the Department of Education who oversees the food served at schools. He is able to exert his clout on food vendors to keep it healthy while simultaneously lowering prices. But concern for the health of the food or the price is not what keeps Mr. Goldstein up at night. As he puts it, “It comes down to: you have a child, you have a tray, you have food. Is it going to be good? Are they going to eat it?”

Studies have shown that despite the trend in America to eat healthier diets, Americans are eating less and less of their vegies. Whether meals are taken at home or in restaurants, vegetables have become the forgotten food. But in New York the trend seems to be the reverse. The students are taking seconds from the salad bar, and they are bringing their love of salad home, according to personal reports, influencing their entire families to eat more salad.

The conclusion from this is that the school cafeteria, so long the butt of jokes, may be the best place to change the habits of tomorrow’s adults; better than all the public service ads, healthy living books, or documentaries combined. And this crucial change in habits can be had for as little as $1 per meal per child. That is quite a savings considering how much obesity is estimated to cost our country each year in our nation’s health bill, lost productivity, and other connected expenses. Since obesity and bad nutrition is linked to such scourges as heart disease, cancer, and other killers, perhaps America can’t afford not to follow New York’s lead and teach our kids to love good, healthy food.