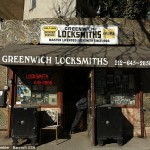 If you’ve lost your keys, we’ve got just the place where you can find them. Phil Mortillaro, a locksmith and owner of a small store in Greenwich Village, has 10,000 keys that just might fit the bill.
Inspired by Vincent Van Gogh’s spiral patterns, Mortillaro has spent two years decorating his shop front with 10,000 keys in unusual and eye-catching patterns.

He bought the collection of keys from wreckers for a dollar a pound, and spent two years intricately designing the exterior of the store with them. Replicating Van Gogh’s “Starry Night” and also paying homage to Jackson Pollock, Mortillaro’s designs are gaining notice in the Greenwich Village area.

His 125 square foot shop has become part of the trail of tourists who retrace the steps of the Beatniks and the 1960s pop stars like Bob Dylan and Jimi Hendrix. Mr. Mortillaro explains his pursuit, ‘I wanted to leave a mark here in New York City and I am pleased that people have begun to take notice of my small shop.’

He’s happy to be an institution in Greenwich Village and to have people who pass by intrigued by his store and his efforts. 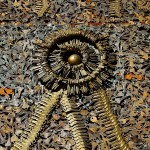