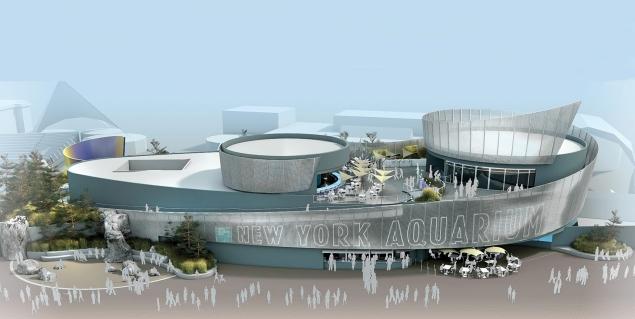 The New York Aquarium in Coney Island broke ground on a years-in-the-planning shark exhibit guaranteed to blow visitors out of the water. The exhibit will be called “Ocean wonders: Sharks!” It will take up 57,000 square-feet of space and include a coral reef tunnel directing visitors through a 360-degree view of a huge variety of ocean life. The new addition is scheduled to open to visitors in 2016.

“You will be surrounded on all sides by not only sharks, but by schools of bright colored bony fish and the sort of beauty of the tropics that we all associate with diving”

said Jon Forrest Dohlin, aquarium director and vice president of the Wildlife Conservation Society, the organization that runs the aquarium.

The budget for the new exhibit is $157 million and will feature over 100 marine animals. The creatures will be brought in from all over the world as well as include local species. No less than 45 sharks of various types will have a presence in the three main 500,000 gallon tanks.

“It’s going to be a tremendous expansion of our collection” said Dohlin. “I think people will be amazed, exhilarated and inspired.”

The building will be three floors high and include a roof-deck overlooking the Atlantic Ocean. A cafÃ© and classroom space will also be built.   The new extension of the aquarium was supposed to have begun a year ago, but Hurricane Sandy caused so much damage to the aging building that the project had to be delayed.