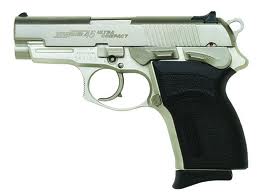 Although Alexis Stewart, daughter of Martha, does not believe that people in America should be allowed to own handguns, she felt compelled to purchase her .357 Magnum after 9/11, explaining that “she would be happy to give up her gun if handguns were banned.” She added that “Having a swimming pool is way more dangerous than having a gun.”

Ms. Stewart is just one of 37,000 New Yorkers packing iron legally these days. The number of handgun owners might be relatively small, but there is no prediction based on race, creed, political party or fame who is likely to be an owner of a weapon. Some are quite open, even proud of their status as armed citizens, like the famous divorce lawyer Raoul Felder, who gladly posed for a photo holding his .38 caliber Smith and Wesson. Others were not so happy that their name would appear in an article on the subject, even though their gun ownership status is in the public record.

There are two steps required to legally own a handgun in New York. The first step is to get a license. The cost of a license is $340, it takes about 12 weeks to process, requires a background check conducted by the NYPD, and fingerprinting also costs $100.

After the license is obtained the hopeful owner must get a ‘purchase authorization’ from the police, siting the particular weapon they intend to buy.   One license allows an individual to list up to 25 different weapons, but each one must be purchased separately at a minimum of 90 day intervals between purchases. The license must be renewed every three years.

Handguns are further controlled with 8 different classes of holders, from a special license for gun dealers, to ‘home use only’ to ‘carry business’ or ‘limited carry.’

Although there are no statistics on nationwide gun ownership since most states do not require licensing or permits to own a gun, the Pew Research Center conducts an annual survey on the prevalence of private citizens that own guns. They have discovered that about one third of all American households have a gun. Compare that to about 1% of homes in New York and you see that not too many people, at least relatively, are the legal owners of guns in New York.