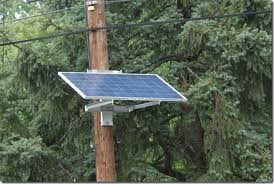 For the past year the largest utility in New Jersey, the Public Service Electric and Gas Company, has been installing solar panels across the state, to a mixed reaction from the public.

The installation of the New Jersey solar panels is the first and largest of its type in the country, and is part of an investment of $515 million by PSE&G in solar projects which is part of a state wide effort for power providers to supply 23% of their electricity from renewable sources. The plan involves mounting 200,000 separate panels in neighborhoods in which PSE&G services, which includes about three-fourths of the area of New Jersey. If the panels were laid out side by side the five-foot by 2.5 foot panels would cover an area of 170 acres.

After California, New Jersey leads the nation in solar power capacity. This is due to the financial incentives and the commitment of the government to support renewable energy industries. This public policy commitment was seeded by the administration of former Governor Jon S. Corzine. However, the pride citizens should be experiencing as a leader in solar power generation has been offset by the discontent with the aesthetics of the project.

In most other solar projects the panels are mostly hidden, either in industrial areas or on rooftops. These solar panels, in contrast, are being mounted on utility poles in scenic residential neighborhoods, in some cases blocking views, and in other instances just sitting there looking ugly.

As the solar panels infiltrate into the quiet, tree-lined bedroom communities, unrest is developing among residents. Despite the fact that the installation of the panels by the crews of PSE&G has passed the halfway point, new resistance is being encountered in the cities, villages and boroughs of Bergen County. Using words like ‘hideous’ to describe the panels, residents are experiencing extreme feelings of mortification at having the look of their neighborhoods transformed, even if it is for a worthy cause.

Local leaders have forced a temporary stoppage in several towns until they are assured that they will not be liable in case of injury to the crews conducting the installation, but also to delay the installation so that alternative sites for the panels can be found, such as garbage dumps, to preserve the aesthetic appeal of their neighborhoods.

Citizens Are Fighting Back

In Oradell, New Jersey one panel is missing.

In nearby Ridgewood, an affluent town of 24,000, Ridgewood, Deputy Mayor Thomas M. Riche said that townspeople have contacted him and even have stopped him on the street to complain about the panels and the destruction of their town. Ridgewood was able to halt further installation of the solar panels after only a few were put up, siting the possibility that the panels would disrupt the function of the emergency communication boxes which are also installed on the poles.

Mr. Riche is in talks with PSE&G about an alternative approach to placing the panels, suggesting that the Ridgewood panels, at least, would be better placed at the town’s park-and-ride parking lot and on top of the public schools in town.

“A cluster of panels in one area is better than individual panels all over the town” Mr. Riche said. “We’re not against solar energy, but there are more efficient ways than having panels on the utility poles.”