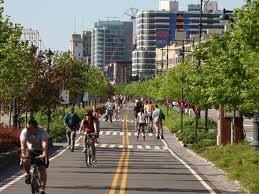 Although everyone agrees that bike-riding is a sport, it is rare indeed for cycling to be part of a physical education program in school. Major barriers preclude biking from entering the gym as a discipline, including the prohibitive cost, storage space, and not least of which, safety. After all, in the inner city the kids will need to bike around busy streets loaded with seriously dangerous hazards.

But safety was precisely the reason one school principal in the Bronx decided to begin a biking program in her school. Louise Sedetto, principal of Public School 76 decided that it was crucial to teach her students safety while biking after one of her 10-year-old students was killed after being hit by a car while riding his bike after school, in June, 2009. Ms. Sedetto immediately bought bike helmets for all of her 1,100 students and began a bike-riding educational program at her school. Ms. Sedetto explained that “It gives us a chance to teach about bike safety.”

Just because the school could not afford to outfit the kids properly for this special curriculum was not an obstacle for Ms. Sedetto. She contacted a nonprofit organization called “Bike New York” which has been leading the way to get schools to teach cycling in schools as part of the physical education program in New York.

Rich Conroy, director of education programs at Bike New York explained, “There’s really a movement within the physical education world to teach lifetime fitness skills, so that’s how it got started.”

Bringing Biking to the Schools

Bike New York began lending bikes to schools around New York in 2008. They began with a collection of 30 adult 21-speed mountain bikes and 30 smaller bikes for younger children with 20-inch wheels. They lend out the bikes and helmets for no charge for a period of three weeks at a time, and if needed they can offer training and a curriculum for those who want to teach the subject but might not be equipped to take on the responsibility themselves.

When Bike New York first offered the program only one school took them up on the offer. This year four schools joined in the program.

Freedom to Ride to School

The classes emphasize safety and biking skills, including: how to wear a helmet and pick one that fits well; how to check for the safety of the bike; proper starting and stopping; how to ride in a large, crowded city like New York, including learning hand turning signals and properly judging traffic. However, as an added safety precaution the classes themselves are taught in parks, playgrounds or even in the school gym.

Mr. Conroy said that the bike-lending program is slowly growing. Parents requested that Mr. Conroy come to last month’s PTA meeting at the Booker T. Washington Middle School on the Upper West Side to investigate bringing the cycling program to their school.

“Wouldn’t it be great if they could actually ride their bikes to school?” said Liz Friedman, the P.T.A. vice president and mom of a 12-year-old boy who attends the school.