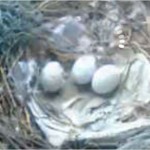 Everyone seems to be getting into the action, keeping their attention on a pair of unlikely lovers. For quite a few months now, President John Sexton of New York University and those who visit his office have been admiring two red-tailed hawks. They have made their home on a window ledge outside the President’s office and have been officially named Bobby and Violet.

After a number of quiet months of admiring the hawks, President Sexton noticed three eggs in the nest. The New York Times installed a Hawk-Cam focused on the nest. They provide updates on the City Room blog where viewers can enjoy watching the nesting birds in a live video stream.

Now, thousands of people have been checking out the birds and waiting for the big news. About 4000 people were waiting on the edge of their seats for the eggs to hatch.
The New York Times consulted with Robert Horvath, raptor rehabilitator, yesterday, as the eggs appeared to be hatching. He wrote back to say, “The egg on the left side definitely shows activity on the right side of the egg. It’s just a start but if that’s last night it should be completely out today.”

Those who are interested should keep their eyes set on the webcam — the birds are set to hatch any minute now!