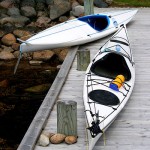 That’s what Erik Baard is hoping you’ll do — even if you think you’re living in sky-scraper heaven New York City. Erik Baard is a kayaking enthusiast and the founder of the Long Island City Community Boathouse. A kayak lover, he first started kayaking in New York with a trip in Port Washington in 1996.

Now, this professional writer and outdoor enthusiast with be getting Gowanus and other New York residents off of their duffs and into the waters. On Thursday, September 8th at the Community Chest Building in Port Washington, he’ll be presenting “The Saline Skyline: Adventures on the New York City Water Trails” as part of the North Shore Kayak Club. He will discuss all of the wonderful waterways that New York possesses for recreational paddling including the Gowanus Canal, the Bronx River and others.

His talk will include an explanation of the origin and composition of the New York City Water Trail and it will highlight the best places to kayak in the five boroughs without hassles.

Professionally, Mr. Baard is a writer with an extensive resume. He’s been published by The New Yorker, The New York Times, Wall Street Journal, Economist, Village Voice, National Public Radio and Popular Science. He’s been nominated for a Pulitzer Prize for features he’s written and for explanatory journalism and he’s been honored as the 2011 Greenest New Yorker by the NY State “I LOVE NY” campaign for the volunteer work he’s done in the area.