An upper-crust English antique dealer, Trainspotters Ltd. is selling hundreds of the iconic “Walk/Don’t Walk signs” a trend in design which has taken the ordinary paraphernalia of life and turned them into objects of art.

Jesse Carrington, the director of Trainspotters explained that a New York street sign is “probably the only traffic signal that we would be interested in the world. They are such a classic. It’s our first entrance into traffic signals, and I think it will be our only venture, because you can’t get any better than it.”

City agencies often sell unwanted or surplus items at increased prices, knowing that there are collectors who will pay the higher costs. For instance, collectors of subway souvenirs can purchase such objects as used train doors, poles and benches directly from the Metropolitan Transportation Authority.

Private Dealers Get in the Act

But the marked-up prices the City asks in nowhere near the kind of charges a private dealer will demand for the same collectibles, bringing to life the clichÃ© that one man’s trash is another man’s treasure. 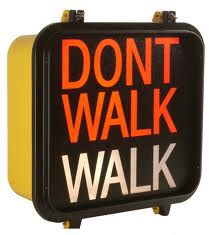 Back in 2004 the City’s Department of Parks sold the old seats from Yankee Stadium for $1500 per set. Today the seats can be had for a cool $2000 per seat. You can check it out at YankeeStadiumSeats.com, which calls itself a ‘direct-order’ stadium seat reseller.

The high price of the ‘Walk/Don’t Walk’ signs do not seem to be hampering business. In fact, the lights are selling well. Only having just begun the sale they have already shipped signs to collectors in such far-flung lands as Switzerland and New Zealand.

Mr. Carrington of Trainspotters was a little bewildered that New Yorkers would be so uninterested in the basic fixtures of their own environment and allow them to go so ignored.

“I don’t think that would happen in London” he said. “Over here, everybody would be all over stuff like that – big competition. People are stranger in New York.

“I’ve bought things from downtown New York before, shipped them back here (to London,) and sold them back to the Upper East Side” Mr. Carrington said with amusement.

“We’ll see quite a bit of them going back over the Atlantic into people’s apartments in New York.”