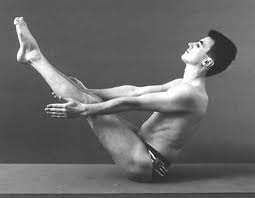 This may not be for everyone; actually, it’s probably not for most of us.  But for those uninhibited men who enjoy yoga – Michael Gates’ class might just be the ticket.  Every Tuesday night, Gates teachers naked yoga to a group of men in a secret location in South Park Slope.

He’s had a “Naked Space” studio since 2006 and explains that he’s seen men shed their inhibitions – sometimes quickly and sometimes slowly – through his classes.  As Gates explains the philosophy behind naked yoga,

"Our clothes are costumes and armor. Naked yoga is an interesting metaphor for letting go of the B.S."

Naked yoga took off in the news, of course, when Kris Humphries walked in on a naked yoga session that Kim Kardashian and her sister Kourtney were enjoying.  For their class, however, the instructor was naked and the girls were clad, albeit scantily clad.

Gates’ class serves, as he explained, to allow the body to be fully aligned and to see if all positions are being done correctly without the extra noise of clothing.

The 90 minute intermediate yoga class costs only $20. There are usually about six participants and Gates has had create success with his regulars.  As classmate Tom, who also enjoys going to nude beaches, explained, "I like being naked. By being naked without the rest of your clothes, it allows you to experience the body in all the poses."

Not surprisingly, Gates found that the co-ed naked yoga classes he tried to offer didn’t quite work out.  As he said, “When I offered co-ed sessions, I found they were attended 98 percent by men." Go figure.

"Some people come with a sense that we're doing something else. They show up and say, 'You mean it's just yoga?'

He replies, "Yeah, it's not code for something else."