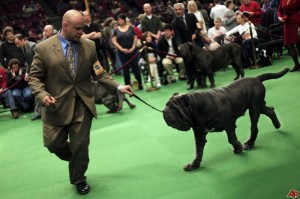 This week, New York City hosts the 135th Annual Westminster Kennel Club Show. The competition is currently in progress at Madison Square Garden, and will continue throughout the day. Over 2,600 dogs are participating in the event, and the competitors have all been previously named as champions in other prestigious events throughout the country.

This year’s competition will feature 179 breeds and varieties from 49 US states and numerous other countries including Thailand, Brazil, Slovenia and Australia. The winners in the hound, toy, herding and non-sporting groups were announced yesterday, on Valentine’s Day, and the top sporting and working dogs as well as terriers will be announced later today.

This is the first time that the Garden has hosted Icelandic sheepdogs, redbone and bluetick coonhounds, Leonbergers, Boykin spaniels, and cane corsos. There are 56 Rhodesian ridgebacks participating in this year’s competition, and only one Neapolitan mastiff- who will surely win the best breed of competition award.