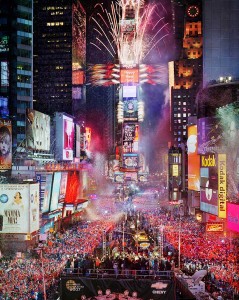 New York’s Times Square was filled with hundreds of thousands of people last night, gathered to say their goodbyes to 2011 and to watch the famous crystal ball drop as they welcomed the new year.

New York police predicted a crowd of more than one million, with the unusually warm weather and the weekend date adding to the turnout. The evening’s entertainers included teenage heartthrob Justin Bieber and the famous, silver-adorned Lady Gaga.

Though the city was filled with security, and bomb squads and policy on high alert, the evening passed quietly, with no glitches. At one minute to midnight, New York mayor Michael Bloomberg and Lady Gaga triggered the decent of the crystal ball, as tradition has dictated since 1907. As the clock struck midnight the sky was filled with fireworks and the crowds were showered in festive confetti to celebrate the arrival of the New Year.

Other famous performers throughout New York City included Chuck Berry, the rock legend, as well as Placido Domingo, who performed at the Metropolitan Opera.