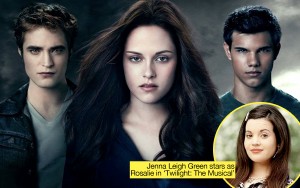 Off-Broadway’s Twilight: The Musical premiered this week in New York City to benefit Blessings in a Backpack, an organization that provides elementary school children with food on the weekends.

The parody, created by Ashley Griffin, “examines our culture of obsession through the story of a teenage outsider Bella Swan who risks everything when she embarks on a star-crossed romance with vampire Edward Cullen” according to the press.

With music and lyrics by Jeremy Ezell, Ashley Griffin, Michael Sutherland, David Mallamud and Sean Mahoney, as well as stars from Rent, Wicked, Newsies and West Side Story, the show was sold out almost immediately.

One of the reasons for the performance’s popularity is the fact that the story is a parody which pokes at the original saga’s melodramatic scenes and characters. The plot is visited by the beloved wizards Harry Potter, Hermione Granger and Ron Weasley, who take over for the original villains with catchy songs like “Die Bella Die.”

“The way it was used worked well. There might be something that is a bit cloying about it, marrying these two franchises whose fans never seem to get along very well, so it might be a bit baiting in that regard, but I think the way they did it made sense” said Amy Wilkinson of MTV News.

Wilkinson added that though most of the dialogue was taken from the Twilight screenplay, the show has the audience laughing out loud at some of the more memorable moments from the film. “The one moment that the entire audience busted a gut over was in reference to a scene from the first ‘Twilight’ movie, when they’re going on the biology class field trip and Alice Cullen is asking Bella if she’s going to ride on their bus. In the movie, Robert Pattinson’s Edward is kind of like ‘Oh no, she’s not’ but in the production I saw Colin Hanlon, the guy playing Edward, turned around and yelled as loud as he could ‘SHE’S NOT COMING!’ I don’t know what it was about that, but the entire audience nearly died. The actor himself was cracking up, everyone was cracking up because it rings true to how bizarre that moment is in the film.”