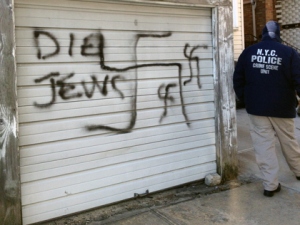 Anti-Semitic activity in New York and New Jersey is on the rise. A Brooklyn boutique was recently confronted for selling Swastika-shaped earrings, and now Ocean Parkway’s Midwood area is awash in graffiti and Jew-hating phone calls.

Two homes, an apartment building and a school were covered in numerous swastikas and the message “Die Jew” leaving residents fearful and angry.

David Haddad, a 56-year-old Jewish building manager in Chelsea, was recently arrested after leaving several threatening anti-Jew messages on women’s answering machines, but it is still unclear if the man had anything to do with the other attacks.

“This first arrest is an empowering development” said David Greenfield, City Councilman. However, “it seems this is happening all over the city. All at the same time. It seems this individual is responsible for a section of it.”

The victims of the attacks have stated that they are not familiar with Haddad, but hope his arrest will diminish the vandalism. Steven Miltz, one of the victims, suggested that Mayor Bloomberg meet up with his neighbors to sooth their nerves. Midwood residents are certainly shaken, as are people throughout the borough as the vandalism spreads.