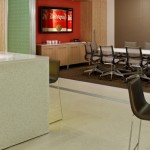 So many people don’t realize how much good they could do if they put their minds to it. Dal LaMagna is a perfect example of this point. Today, he’s running a Brooklyn Navy Yard factory that manufactures kitchen and bathroom countertops from cement and recycled glass.   Up until now, the factory has never been profitable and it has recently been on the verge of closing.

Having made his fortune when he revolutionized the tweezer and sold his tweezer company eight years ago, LaMagna had most recently been at home day trading. As he said, “I was a man of leisure, and I wasn’t happy.”

He’s now trying to make this Brooklyn company where he’s an investor stay afloat, and he’s doing so in very inventive ways. Stepping in as CEO last October, he has since increased workers’ wages to $15 an hour from $10 and has cut top managers’ salaries. He’s also made the workers at IceStone part-owners, giving them 10% of the company’s stock. While this is typically done in high-tech companies, it’s a far more unusual move for a factory.

LaMagna explained his motivate when he said, “Now making this company work is everybody’s problem.”

With an impressive example behind him, LaMagna has shown that he has the workers’ needs in his mind. When Tweezerman was sold, workers received a combined $12 million, including as much as $90,000 which was awarded to some of the blue-collar workers there.   LaMagna predicts that IceStone will be profitable by the fall, and then he hopes to keep it going and to start turning a profit.

And his workers, who are all committed to him and to the cause, couldn’t agree more.