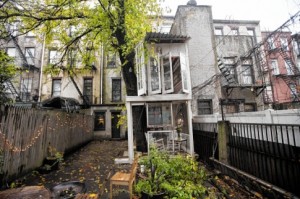 Those Brooklyn residents sure are resourceful when they need to be.   Alexandra Meyn, feeling frustrated last year that she couldn’t find a job, started designing a treehouse.   Yes, a treehouse.

The Dream of a Treehouse

Today, the beautiful, cozy spot sits eight feet high in the 40 square foot space in the back yard of a Bedford-Stuyvesant brownstone.   As she said,

“I never had a treehouse, but I always wanted one. It was like a dream I could make come true.”

Calling the location “a sanctuary” she uses it to keep her “spirits elevated” as she searches for a job with her master’s degree from Pratt Institute and her MBA from the University of Arizona.

Making News with the Treehouse

Her treehouse has become an internet sensation since the New York Times and then the Daily News published articles about it.   The house is assessable with a metal ladder and was built after she received her landlord’s permission and an ok from the other nearby tenants.

In total, the construction materials and scavenged resources for decorating the pad came to $400.   But it’s offered much more than that in relaxation and enjoyment.   She’s decorated the treehouse with fun wallpaper, collages and colorful rugs.   She even built a wood deck beneath the treehouse for friends who want to hang out but who can’t make it up the ladder.

And, the best part is that Meyn’s started getting some freelance design assignments from the buzz that she’s creating.   She explained,

“It was really rejuvenating to have people excited about the treehouse. It made people happy. That was really fun.”