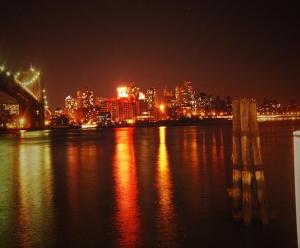 Twenty five sculptures are currently on display in New York’s World Financial Center for the city’s 18th Annual CANstruction Competition. Each of these sculptures is made of over 100,000 cans of food, and created by engineers and architects. New York is one of around 100 cities in the world who are participating in this international charity competition which works to help the hungry during Thanksgiving season. All of the cans used in the contest will be given to City Harvest, to be distributed to programs that feed hungry New Yorkers.

The competition rules allow five players per team. The cans must support themselves; they cannot be glued or stuck together by any means, nor can they be painted. For that reason, the competitors scrambled to find cans of tuna or beans or vegetables with labels in the right color for their design.

The entries included Russian Babushka Dolls, a tornado, Mr. Potato Head, the ‘MTA Train’, King Kong and more. Some of the sculptures are so big that the viewer must stand back in order to recognize them, like the one that depicts Mario and Luigi from the video game.

Second and third graders from the Mustard Seed School in New Jersey visited the exhibit on a field trip, and were especially thrilled. Their art teacher Lynn Hamill was also excited, and explained that “this year we are teaching them about buildings, foundations and service projects so this is the perfect combination.” The children were told to sketch each entry, and write how many cans were used, as well as how many people it would feed.