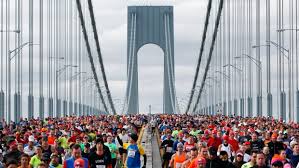 How many people have finished the New York City Marathon in the past 44 years? The answer is, “More than a million” and the millionth runner made history yesterday, earning herself guaranteed entry into the race for the rest of her life plus a shopping spree for marathon gear.

Katherine Slingluff of Park Slope, Brooklyn, won this special honor, finishing the race in 4 hours 43 minutes and 36 seconds, more than two hours after the first place finisher in the women’s division, Mary Keitany of Kenya. Keitany won the race in 2:25:07.
Slingluff is a mother of two, a photographer, and originally from Alabama.

“That’s a nice treat, to be the millionth runner!” Slingluff said. “I didn’t make my goal as far my pace goes, but I guess it worked to my advantage. That’s a nice cap to my run.”

Slingluff said she did not feel compelled to maintain a strict 10-minute-mile pace.

“I gave myself liberty to walk through water stations, I took pictures on the Queensboro Bridge” she said. “I decided to try and soak it in – I knew I wasn’t going to win the thing!”