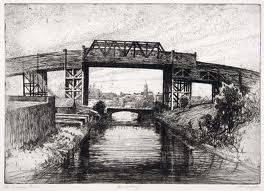 As early as 20 years after its opening in the 1860s the Gowanus Canal was already producing a stench all over the south Brooklyn neighborhoods through which it flowed. Before the construction of the Gowanus Flushing Tunnel which was designed to help keep the Canal clean and eliminate the putrid odors, the tides were the only source of fresh water for the canal.

It took another 30 years, but on June 21st, 1911 the great hope for south Brooklyn noses was finally opened; a flushing tunnel had been constructed north of the canal which flushed out the canal by pulling cleaner water in from Buttermilk Channel, nearly one mile distant. The opening was honored by the residents like a holiday, with flags, and bunting decorating shops along the streets and yachts and barges celebrating the event in the canal.

Mayor William Jay Gaynor turned on the electric motor which spun the nine-foot propeller and brought the flushing tunnel to life. “You have now the waters of the Gowanus purified” the mayor remarked, as the water from the canal flowed into the new tunnel like an oversized toilet.

It is unclear if the tunnel ever properly served its purpose, but certainly within a relatively short time the unpleasant aromas returned with a vengeance. 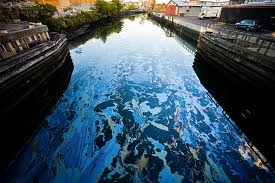 Today the city is about to embark on a $140 million project estimated to take about 4 years to complete. The goals are not complicated and include rebuilding the motor pit and changing the propeller while replacing it with three state-of-the-art vertical turbines; cleaning out the tunnel and repairing leaks while smoothing out the walls; encasing a new sewer pipe in concrete which will increase the flow of water; reducing the amount of sewer overflow     by enlarging the capacity at a pumping plant nearby.

The hope for the renovated tunnel is that although all the work will be done within the underground tunnel out of the residents’ sight, the neighbors will detect the difference with their sense of smell, and they should notice a great improvement in the quality of the water in the canal. The city wants to keep the oxygen levels of the water in the canal high enough to support aquatic life, and they are struggling to achieve this even while the renovation is progressing. The work is scheduled to be finished by 2013. When the day of completion finally comes the residents will know just by testing the air around them whether or not the renovated pumping tunnel has achieved its goals.