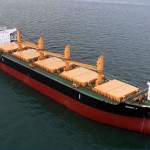 Many shipping companies, including Eagle Bulk Shipping call the New York Port their home base. In recent news for Eagle Bulk Shipping Inc., they announced that Adir Katzav, formerly the Director of Financial Reporting, would be promoted to Chief Financial Officer. Taking over from Mr. Alan S. Ginsberg, Mr. Katzav took on the role in mid-August.

“On behalf of Eagle Bulk Shipping’s Board of Directors, I would like to thank Alan for his dedication, commitment and leadership over the years. His contributions have spanned our initial public offering through some of the most challenging shipping markets in a generation.   We congratulate Alan, and extend our best wishes for his future endeavors.”

“It has been a privilege to serve Eagle Bulk during the last 7 years. I leave Eagle Bulk knowing that it is on stable financial ground — an accomplishment that capped a wonderful career at the Company.”