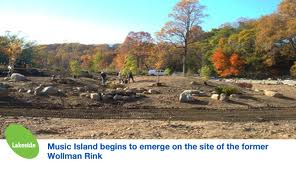 Apparently Atlantis is not the only long-lost island in history. In distinction to Atlantis, however, the Prospect Park island, called Music Island, has not only been discovered, but has resurfaced to the light.

Music Island was part of the original design of Prospect Park, created by Olstead and Vaux back in 1867. In 1960 the island was submerged under the newly built Wollman Ice skating rink.

"Music Island was flattened and then the rink slab was poured on top of that fill," said Emily Lloyd, the president of the Prospect Park Alliance.

"Somehow, we had to figure out that underneath it, we could recover an island and water body and re-create this natural landscape," said Christian Zimmerman, the head landscape architect for the project.

Two years ago the rink was razed and park officials brought out old photos of Music Island in an effort to recreate the historic landscape.

"That all had to be excavated and then redesigned without having the original plans, really from looking at old photographs and reading minutes from meetings where it was discussed," Lloyd said. "So it was very painstaking. It was a real effort of love to re-create what was here."

The resurrection of the island includes an esplanade looking out over the island. The island was used for concerts and audiences used to congregate in an area called Concert Grove; thus the designation “Music Island.”

The new area was dedicated to Shelby White, a Brooklyn native, and her family. The Island itself is named for Shelby’s father, a music lover. The esplanade’s name is in honor of White and her husband Leon Levy, who passed away. The $10 million project was funded by the Leon Levy Foundation. White herself grew up only one block from the park.

"When I came back years later and I realized how special this place was, I knew that I wanted to do something to help Brooklyn and bring back what was the golden age of my childhood," White said.

The project has been under construction for the past 2 and a half years and includes about 10 acres of the central Brooklyn park. During the dig the crew discovered a water fountain from 1860.

Although it no longer works, the fountain will be used as part of the landscaping in the park.

A new ice skating rink is also under construction. It will be used all year long and will be located right next to the esplanade and called Lakeside Center. The rink is expected to open in about one more year.