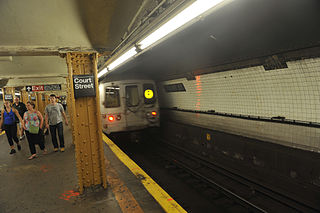 After six-months of renovations, the 53rd Street station in Brooklyn is open for business. Commuters expressed a mixture of pleasure, bewilderment and disappointment at the changes they found.
For $72 million three R lines stations got facelifts as part of Governor Cuomo’s plan to re-do and upgrade 33 stations overall.

Travelers were happy to see glass barriers, bright lights, beautiful new art, and even USB ports at the Sunset Park station. What they weren’t quite as glad to see was something new: leaning bars. One commuter said, “I was wondering what it is.” She is a nurse, and because she is on her feet all day long she would, “rather have benches instead of this leaning thing.”
It seems several people had the same reaction to the leaning bars. The trains on the R line are notoriously interspersed, often ten minutes between trains. Often called the “Rarely line,” several commuters voiced their preference for a comfortable place to sit.

Without benches homeless people have nowhere to lie down, say some. Joe Rappaport, executive director of the Brooklyn Center for Independence, a non-profit organization supporting those with disabilities, said the design of the leaning bars is “incredibly unwelcoming,” and uncomfortable.

“People who travel who have disabilities or just get tired sometimes need a bench to sit on, not a wall to lean against,” Rappaport said. “You want to lean, you can lean. There’s a wall in the subway station.”

There is also disappointment that much needed elevators have not yet been installed. An elevator would be helpful not only to those with disabilities, but also to the elderly and people with children in strollers. At the moment, the Metropolitan Transit Authority has the budget to install elevators and escalators in 19 stations.

The MTA defends its decision to install the leaning bars, asserting that none of the benches that were there before were taken out.

“These bars were adopted for the convenience of subway users, providing them with options while taking up very little floor space in the process, as the result of a review of best practices in transit systems around the world,” MTA spokesman Shams Tarek said. “They didn’t replace traditional seating in the station — they supplement it.”