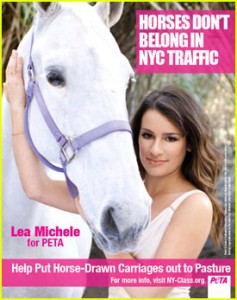 PETA, or People for the Ethical Treatment of Animals, is known to have a talent for attracting popular celebrities to support its cause. The organization has recently been joined by Lea Michele, the actress/ performer who plays Rachel Berry on Glee. Michele is taking part in the campaign which encourages people to “help put horse-drawn carriages out to pasture.” Lea Michele is featured on a wide array of posters stating “horses don’t belong in NYC traffic.”

Manhattan Mini-Storage has donated $125,000 worth of ad space on sites such as bus kiosks to the campaign.

The carriage horse issue has been discussed and protested by PETA for many years now. Other organizations agree that that the policy is inhumane. Last April, the New York City Council voted to improve some of the conditions on behalf of the horses.