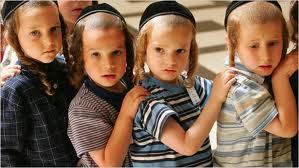 According to the strict numbers, of the 3,700 US villages, towns and cities with populations over 10,000 there is none more impoverished than Kiryas Joel, New York. This town, about 50 miles northwest of New york City, is a quiet community composed of mostly town houses and garden apartments, and yet about 70% of its 21,000 citizens live below the federal poverty threshold, according to the US Census Bureau.

This Orange County town has a median family income of only $17,929 and a per capita income of a shocking $4,494, much lower than any other comparable place in the nation. Almost half of the town’s households reported $15,000 or less in yearly income.

About one third of the residents get Medicaid benefits and depend on federal vouchers to help pay their housing expenses; while about half use food stamps to help pay their food costs.
Yet the village does not exhibit any of the external signs of extreme poverty such as a high crime, teen pregnancy or drug abuse. The poverty as well as the social coherence can both be attributed to the fact that Kiryas Joel is home to primarily members of the ultra-orthodox Satmar Hasidic sect of Jews. A large number of the residents moved there from Williamsburg, Brooklyn, starting in the 1970s as their double digit growth rate forced them to find more spacious accommodations for their families and bursting population.

Due to their strict religious beliefs women get married at young ages, do not use birth-control, and stay in the village to raise their children. Therefore the village as the lowest median age, under age 12, than anywhere else in America, and the average household size, 6 members, is the highest. It is highly unusual for a mother to work outside her home while her children are still young.

English is more like a second language here, where most residents are raised in Yiddish and speak it primarily. Most of the men learn Torah and Talmud devotedly instead of getting an academic degree or professional training. Only 39% have high school diplomas while a mere 5% have finished college. There are several hundred adult men that study full time at religious schools of higher learning, known as yeshivas.

What the Census Bureau numbers leave out from their cold statistics is the community’s tradition of generous philanthropy and no-interest loans. Additionally, some of the families might be eligible for public benefits because they earn low incomes from the many religious institutions and other non-profits which run businesses and schools. Almost half of the village’s citizens that do have jobs work for either public or parochial schools.

The poverty which exists in Kiryas Joel is for the most part invisible. Strollers and tricycles seem to outnumber cars there, which do fill the parking lots. A check-cashing office and a jeweler share a storefront. The chief rabbi recently enacted a decree that forbids wedding rings as engagement gifts as well as declaring that one-man bands are sufficient wedding entertainment; both proclamations designed to avoid stigmatizing poorer young couples.

One may therefore ask, “Are seven out of ten residents of Kiryas Joel really poor?

“It is, in a sense, a statistical anomaly” Professor William B. Helmreich, a sociology professor at City College who specializes in Judaic studies said. “They are clearly not wealthy, and they do have a lot of children. They spend whatever discretionary income they have on clothing, food and baby carriages. They don’t belong to country clubs or go to movies or go on trips to Aruba.

“They’re not scrounging around, though. They’re not presenting a picture of poverty as if you would go to a Mexican neighborhood in Corona. They do have organizations that lend money interest-free. They’re also supported by members of the community who are wealthier – it’s not declarable income if somebody buys them a baby carriage.”

One resident of the town who works as a comptroller for a real estate firm said that before Passover this year, “the number one project in the community was raising funds for food.”
The resident also remembered one neighbor of his asking for help by going door-to-door last year: “He had received two shut-off notices from his utility company, he’s behind with tuition and that his food stamps gets used up before the end of the month. He’s paying too much for transportation to his job, and he had had an unexpected expense that forced him into debt.”

The administrator of the village, Mr. Gedalye Szegedin said that critics sometimes forget that state taxpayers were frequently spared spending money on Kiryas Joel because thousands of village children are attending religious schools. In the nearby Monroe-Woodbury school district which has about the same number of school-age children, about $150 million are spent each year on education, with about one third coming from New York State. In contrast Kiryas Joel only receives about $5million from Albany, also paying about one third of its $16 million public school budget.

“You also have no drug-treatment programs, no juvenile delinquency program, we’re not clogging the court system with criminal cases, you’re not running programs for AIDS or teen pregnancy” he said. “I haven’t run the numbers, but I think it’s a wash.”