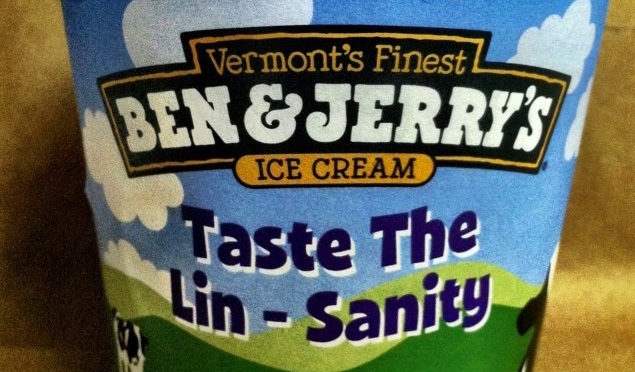 Lin fever has certainly hit the New York area, if not the entire country; but the level of excitement seems to be matched by a level of insensitivity. And this insensitivity has even spread to surprising places – like the ever-thoughtful and politically correct Ben & Jerry’s.

Really? They couldn’t see the racial implications for such a choice before producing it for the market?  They have apologized to Lin and to their customers after feeling an immediate backlash over the racial undertones.  In the apology from the Cambridge, Massachusetts store that started selling the ice cream, they wrote,

“Our intention was to create a flavor to honor Jeremy Lin’s accomplishments and his meteoric rise in the NBA, and recognize that he was a local Harvard graduate. … If we failed in this instance we offer our sincere apologies.”

Completely missing the point, the store’s general manager, Ryan Midden, told the Boston Globe that customers were tremendously excited about the limited-edition flavor and that “we obviously weren’t looking to offend anybody and the majority of the feedback about it has been positive.”

Seems like too little, too late. And we certainly expected more from Ben & Jerry’s.