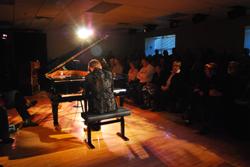 Ordinarily Fred Hersch, beloved jazz pianist who has been nominated for three Grammy awards, performs on a Steinway piano to audiences of between 400 and 800 appreciative listeners. But in what was the first of four jazz concerts to be conducted at the Union County Performing Arts Center in Rahway, New Jersey, Mr. Hersch performed in their intimate 55-seat capacity piano-loft on an extraordinary hand-built piano, a Fazioli.

The Fazioli at the Arts Center is one of only two in all of New Jersey, the other one being at Kean University in Union. There the Fazioli is the centerpiece of the Gene and Shelley Enlow Recital Hall and was purchased in 2009 for the 324-seat theater.

According to Paolo Fazioli, the founder of the Sacile, Italy based company, there are currently only 200 of his pianos in the United States, which were introduced here in 1994 at a cost of between $80,000 and $200,000 each. One of the more noteworthy of these pianos was bought for the Julliard School of Music in Manhattan, which decided to make the purchase after leasing a Fazioli for a year.

The purchase of Rahway’s Fazioli was initiated by Jim Kennedy, former mayor of Rahway from 1994 until 2010, and present executive director of the arts center. The piano cost $95,000, and was purchased through Conservatory Piano and Hi-Fi, a music store owned by Jim and Genevieve Luce located next door to the arts center.

Mr. Luce is also the producer of the Caramoor Jazz Festival which takes place in Katonah, New York every year. He took the role of M.C. for Mr. Hersch’s recent performance and had this to say about that event:

“In the normal world, someone like Fred Hersch is going to play an auditorium with between 400 and 800 people. That up-close, uplifting, spiritual experience can only come in this intimate atmosphere. This space is the very thing that makes us world-class.”

Mr. Hersch received a standing ovation for his performance, which began with complimentary Champagne and cut strawberries for the audience. Three more performances are scheduled for the spring jazz series at the arts center, including James Weidman on May 7 and Dan Tepfer on May 21st.