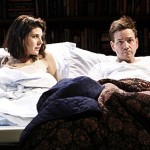 At the moment, the Acorn Theater’s Off Broadway production of Wallace Shawn’s “Marie and Bruce” is making audiences squirm.   While there is no nudity, violence or other unsettling action for the eyes, the plot of the play and the lack of a way “out” is leaving audiences with an unsettling feeling.

Cleary, the play is getting its message across.   First staged in 1979 in London and in 1980 in New York, the play is an unsettling look at a marriage gone sour.   Stylistically directed by Scott Elliott and staring Marisa Tomei and Frank Whaley, the play is on the short list of feel-bad-plays.   It doesn’t leave audiences with the feeling that things will, eventually get better or with the hope of a better tomorrow.

While Mr. Shawn’s title characters deal with issues in their marriage that many of us face, they are issues that we often try to ignore. The characters show mutual irritation, hostility, a sense of isolation and other less-than-lovely interpersonal skills.   The play brings these issues to the forefront and does it in an incredibly raw, in-your-face way.

As Ben Brantley explains in The New York Times after his recent viewing of the play,  “At a time in the theater when anything goes (to borrow the title of an old comfort-making musical now revived on Broadway), making audiences squirm isn’t easy. But when discomfort is provoked in the theater, it has a power that can’t be matched by film or television. After all, you can’t change the channel or bolt for the lobby (at least not if you have good theatergoing manners). What’s happening before you is piercingly, mortifyingly live. At least in the dark, no one can see you blush. “