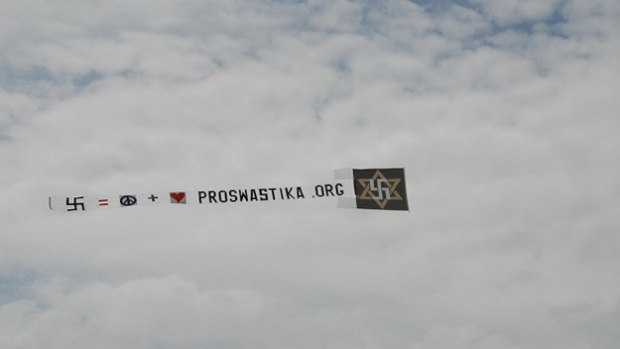 In celebration of “World Swastika Rehabilitation Day” a fringe group of UFO enthusiasts known as the International Raelian Movement sponsored a cryptic message flown over Manhattan, New Jersey, Long Island and Brooklyn. The flying sign depicted the much maligned symbol of Nazism, hatred and murder, the swastika. Those who looked carefully, however, would have noticed not just the hated symbol, but also a peace sign from the anti-Vietnam War movement, and a heart, together with a website for people to turn to for more information, presumably. In addition, and perhaps most disturbing of all, was another symbol featuring a swastika superimposed on a Star of David, a universal symbol of Judaism.

Confused and upset? You are not alone. One Miguelina Nunez tweeted that: “It’s a gorgeous day . . . And some idiot is flying a swastika banner off the tail of his plane up and down Manhattan.”

According to Las Vegas-based Thomas Kaenzig, leader of the Raelians, the swastika has existed as a symbol of something good for thousands of years before the Nazis used it as their symbol of hatred.

“The swastika is one of the best traces left by those who created us, and the attempt to bury it as a symbol of violence and hatred only gives credit to the horrible Nazi ideology,” Kaenzig said. “Some people associate the swastika with something negative, but you don’t stop using the cross just because of the Ku Klux Klan.”

Did I mention that back in 2002 Raelians received some publicity when they declared that they had cloned a human baby, an assertion that was never confirmed. In addition, they believe that humans arose on earth as a kind of science experiment performed by advanced alien scientists, and the swastika is a symbol for these creators of our species.

Writer of the soon to be released book “The Axmann Conspiracy: The Nazi Plan for a Fourth Reich and How the U.S. Army Defeated It” Scott Selby, agrees that the swastika was not always a symbol of evil. Nevertheless, he says it is too late to change its new meaning.

“Some things are so debased that they can’t be redeemed,” Selby said.

But Kaenzig says the creators will not return unless the symbol is rehabilitated. This is the fifth year Raelians have sponsored such a movement.