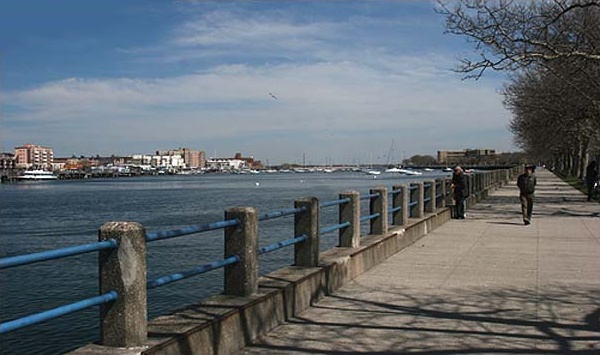 The memory of Hurricane Sandy and the devastation it left in its wake seems to be quickly fading for many as developers clamor to bring modern structures into the most vulnerable Brooklyn neighborhoods.

Take Sheepshead Bay, for instance. Once a sleepy fishing village, parts of the neighborhood lie within the riskiest of the city’s six designated flood zones, the zone closest to the shore. Yet development has been growing steadily. In 2013, just one year after Sandy, only 13 permits were filed for new buildings in the 11235 zip code section of Sheepshead Bay. In 2014 that number rose to 18, and then in 2015 it rose again to 21. Also up are permits for demolition; 14 in 2013 and 42 in 2015.

Today there are at least two noteworthy projects under construction. Already going up is a 28-story condominium tower at 1501 Voorhies Avenue. Muss Development and AvalonBay are partnering on this building which will be the tallest structure in Sheepshead Bay when it is completed in 2017. Its location adjacent to the Sheepshead Bay subway station and the B and Q subway lines makes it easily accessible to Downtown Brooklyn and Midtown Manhattan.

Just a few blocks away from the condo a 7-story commercial-residential development is also under construction. The VUE is under the auspices of developer Sergey Rybak. Located on Emmons Avenue, it will have a roof-top pool and deck and 58 units. The property was purchased for $13 million, including buying out a local diner which had operated on that location for over 40 years. The look of the new building, a modern, glass-sheathed design, is also a stark contrast to the brick and mortar style buildings that characterize the area.

Push-back has come to these projects and others for basically two reasons. One is the fear that the new, modern designs will change the character of the neighborhood. Modern, high-density condo-towers will not only change the look of the area, but it will also attract a new type of resident, which worries some.

Others see the proximity to the ocean as a serious danger.

“We should be pulling back from the waterfront, not doing density,” said Steven Barrison, the president of the Bay Improvement Group, a coalition of Sheepshead Bay businesses and civic groups.

Mayor de Blasio has been taking a different approach to the danger. Since Hurricane Sandy 16 new building codes have been instituted to keep the buildings safe.

Still, experts like Ted Steinberg, a professor of history and law at Case Western Reserve University and the author of Gotham Unbound: The Ecological History of Greater New York,  say this approach is foolish.

“There is this short-term, profit-driven real estate logic in conflict here with an extremely likely long-term trend toward environmental instability,” Steinberg said.