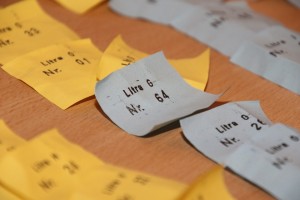 The Gowanus apartment lottery attracted way more bidders than units available. This shouldn’t have come as such a great surprise since the price was right and the location, most sought-after. But deciding to purchase the land to on which to build this property was not only a risk for David Lichstenstein, CEO and founder of The Lightstone Group, but a pricey one. “You must spend money to make money” might have been an infamous quote many centuries ago when uttered by Titus Maccius Plautus, but the sentiment still reigns true today. Thus individuals such as Lichtenstein, (along with other real estate investors) at the nadir or the housing market started, “snapping up foreclosures at bargain prices betting they could rent them for a tidy profit, and sell them for a tidy profit.”

A risk it was, but as Frank Warren taught us when he said “be wise enough not to be reckless, but brave enough to take risks” to succeed, these have to be calculated ones. And when David Lichtenstein’s firm bought out substantial amounts of land it was because its leader was “convinced it would yield better returns for his New York firm.” While the Lightstone Group was not alone in this move, there were still many who avoided engaging in the risk, since at the time it seemed “unlikely to pay off quickly.” It was just the hedge funds and real estate investors with an appetite for success and not afraid to take risks, that did.

And it seems this action paid off in many cases. One such example is the building at the Gowanus Canal. The 86 affordable apartments located at Gowanus’ 365 Bond Street were entered into a lottery sale led by the Lightstone Group. Eighty-six might not seem such a small number, but it’s all relative; with 56,000 applicants, the popularity and attractiveness of these units suddenly appears to be a very elusive thing. Prices of the units are actually extremely reasonable and thus very sought-after: a studio would cost $833 a month and a one-bedroom just $895.

Apart from these low rents, Gowanus is a great place to live. And as everyone with any kind of knowledge for real estate knows, the industry is focused on three things and three things only: “location, location, location. As Scott Avram, one of David Lichtenstein’s co-workers at the Lightstone Group, pointed out: “I would say that it clearly demonstrates the tremendous demand and interest in those looking to live in Gowanus.” Furthermore, together with its sister property 363 Bond Street (also developed by the Lightstone Group), this is a “unique property with an esplanade and a public park, he said.  365 Bond St. has 430 market-rate apartments.”

So this risk seems to have paid off. But why? What was the thinking behind the Lightstone Group’s decision to buy this Gowanus land and then build? Why not simply purchase existing properties and flip them as seems to be common in the world of real estate investors? According to an interview David Lichtenstein gave in The Washington Post, there is a significant advantage to doing it this way. He explained, “I started my career buying and owning single-family houses, and I know that’s a really tough job. Toilets break. Trees fall. There are so many things that can go wrong. Land, on the other hand, is cheap to manage. It’s painless, really. All you have to do is pay your taxes, and that’s it.” With the purchase of land and then the construction of this Gowanus building, the job is already done.

Potential tenants had two months to be included in the lottery. It was run between the beginning of November 2015 and 4 January 2016. It was supervised by the city’s Department of Housing Preservation and Development (HPD).