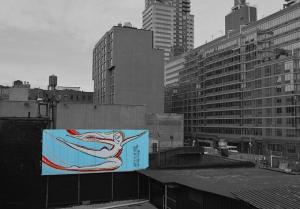 Knitting has been common for as long as we can remember. New York City- based artist Agata Oleksiak, or ‘Olek’, however, has taken the pastime to another level; she has used “hundreds of miles” of yarn while creating a showcase of her work.

The exhibit featured a house, or a life, really, completely covered in crochet artwork- including the ten inhabitants. The people reenact domestic situations like taking a bath, practicing music and ironing. Their yarn-covered car waits just outside the house.

This is not the artist’s first piece of knit artwork. Olek, who was born in Poland, said that she often finds herself alone for days on end as a result of her work. She explained that “choosing crochet as my artistic method was not a conscious decision; it came to me when I was trying to figure out one assignment and it did not leave me… I feel like somebody, or rather something glued the hook with crazy glue to my fingers. A loop after a loop. Hour after hour my madness becomes crochet. Life and art are inseparable.” She added that her “use of crochet has no relation to the world of craft, rather it is used as an alternative to other artistic mediums such as oil or acrylic on canvas. Its use can be interpreted as a metaphor for the complexity and interconnectedness of the body, its systems and psychology, and, in a broader sense, it can represent humanity itself. The connections are stronger as one fabric, as opposed to separate strands, but, if you cut one, the whole thing will fall apart.”

The exhibit has been on display at the New York’s Christopher Henry Gallery.