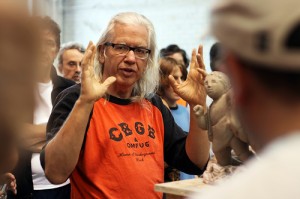 It’s an interesting and complicated situation for Gowanus-based sculptor Tom Otterness. In 1977, he shot a short film in which he shot and killed a dog. Three decades later, he is still paying for this shocking action. In May, he made a very public apology, but it may not be enough.

In his apology he said:

“Thirty years ago when I was 25 years old, I made a film in which I shot a dog. It was an indefensible act that I am deeply sorry for. Many of us have experienced profound emotional turmoil and despair. Few have made the mistake I made. I hope people can find it in their hearts to forgive me.”

Now, the sculptor’s latest project may be in jeopardy. Otterness was tapped by San Francisco’s Arts Commission earlier this year to create 59 bronze sculptors for $750,000. He was also awarded a $700,000 contract for a large-scale sculpture at San Francisco General Hospital last year.

At the moment, both of these projects are in jeopardy. The Arts Commission will be meeting to discuss Otterness and the contracts they’ve signed with him, based on the 1977 film. Last month, the San Francisco Animal Control and Welfare Commission called for the projects’ cancellation. Arts Commission Chairman PJ Johnston told the Examiner that he doesn’t want to get

“into the position of judging the artists rather than the art.”