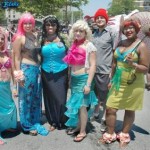 It was certainly one of the more unusual events you’ll catch on Coney Island. This past Saturday, June 23rd, mermaids abounded for the 2012 Mermaid Parade 30th anniversary event.   This event is the country’s largest art parade and its purpose is to kick off the summer and to welcome people to the water, sun and fun.

First started in 1983 by Coney Island USA, a non-profit arts organization, the Parade actually looks back to Coney Island’s Mardi Gras which took place from 1903 until 1954.

As they describe it at the official site for the Mermaid Parade,

“The Mermaid Parade celebrates the sand, the sea, the salt air and the beginning of summer, as well as the history and mythology of Coney Island, Coney Island pride, and artistic self-expression. The Parade is characterized by participants dressed in hand-made costumes as Mermaids, Neptunes, various sea creatures, the occasional wandering lighthouse, Coney Island post card or amusement ride, as well as antique cars, marching bands, drill teams, and the odd yacht pulled on flatbed.”

The parade ends with a march down to the beach to “open” the summer swimming season. The official King and Queen of the parade (this year the Queen Mermaid was Annabella Sciorra and King Neptune was Jackie “The Joke Man” Martling) cut through ribbons that represent the various seasons and then toss fruit into the Atlantic to appease the Sea Gods.

Of course, no one can forget the Mermaid Parade Ball, which takes place after the Parade. It’s a place to listen to live music, to enjoy cocktails and to watch various performances. It took place at the New York Aquarium from 7pm-12:30am on Saturday, June 23rd as well.