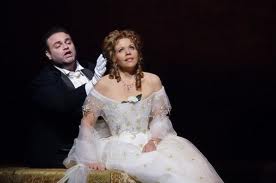 If you enjoy opera, it’s time to run, not walk, to the New York City Opera right now! As a result of a gift by the Reed Foundation and the Peter Jay Sharp Foundation, tickets for the next two productions at the Brooklyn Academy of Music will only cost $25.

This news is certainly a bright spot for an Opera House that has had nothing but frustrations for the last six months.   They’ve been battling with nasty labor negotiations and have been struggling financially.   Leaving their longtime location at Lincoln Center late last year, they’ve been trying to get comfortable at the Brooklyn Academy of Music.

Now, the bargain prices are being made available for “La Traviata” which starts on February 12 and for Rufus Wainwright’s “Prima Donna” which opens February 16th at BAM’s Gilman Opera House.   Tickets were originally priced from $25 to $150, but are all only $25 now.

Things are looking up for the City Opera, as they signed their contract on January 19th and now have a means of encouraging people to come to Brooklyn for the “people’s opera.”

Now if we could only understand what they say during the performance.