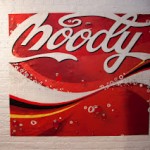 Whether you love graffiti or not, and whether you consider it an art form or not, the Pandemic Gallery at 37 Broadway does. Mutz, or Moody, a graffiti vandal who has managed to turn himself into an artist, is now exhibiting some of his work at the gallery.

Growing up in Bensonhurst, he’s been writing his tag on the walls of the are since the 1980s.   As he mother recounted, “He was always getting into trouble. I bailed him out so many times. Worrying about him writing graffiti was hard, but I’m proud of him, he’s an artist.”

Mutz has actually taken the unusual step of moving from being a late-night graffiti painter, always on the cusp of getting caught, to being an artist and sculpture. He’s had shows at Woodward Gallery and has created art pieces that blend his graffiti background and his examination of modern culture. Around the year 2000, he first started doing installation pieces and has received quite a bit of recognition for his transition.

As the Street Spot blog recently reported on Mutz‘ show, “I stopped by Brooklyn’s Pandemic Gallery yesterday for a sneak peak at Moody’s American Runs on Graff show, which opens tomorrow. Fans of his incredibly clean design and signature characters are in for a real treat, as he’s pulled out all the stops and run with the Dunkin Donuts theme.”

His latest show, entitled “America Runs on Graff” includes sculptures and drawings that mock today’s consumer culture. There are approximately 30 pieces in the gallery. He enjoys, for instance, using the Dunkin’ Donuts logo to poke fun at American culture.

His current exhibit will be available until July 15th.