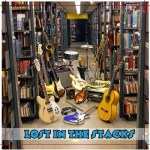 Most of us think of librarians as quiet and reserved, but these Brooklyn librarians are kicking up their heels and having fun. That’s because they’ve create a band called Lost in the Stacks that plays specifically at book festivals and branches around the city.

As Jack McCleland, head librarian at the branch at Grand Army Plaza explained,

“This gives the people another image of librarians. There’s this stereotype of librarians being this older woman with her hair in a bun shushing everyone. We’re not like that. We have a lot of very hip and very cool people.”

Eight years ago, McCleland decided to form the band for quite a sweet reason. Asked by another staffer who died if he would perform, McCleland put together a group with seven other librarians to play a quick performance — and they’ve been together ever since.

As Matt Cole, who works at the Kensington branch explained, “We’re not your father’s and mother’s librarians. A lot of us are the really creative types.” The band actually released an album with their own original music last year that is selling for $10 a copy on Facebook. They also play music by jazz and blues greats.

They are currently working on another album and hoping to branch out (pun intended) even more to reach beyond the library scene.