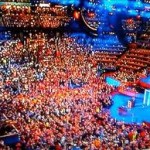 This Brooklyn DJ certainly has his groove on – and he’s about to bring it to the Democratic National Convention. Vikas Sapra, from Williamsburg will be playing for the crowd at the National Convention’s closing party on Thursday.

The location for the event hasn’t yet been announced, and Sapra has explained that

“I won’t know where it is until I arrive in a car. This is by far the biggest honor I’ve had to date.”

Sapra said that he hopes to play “Chicago soul sound” for the president and the crowd, and include classic hip-hop music and other feel-good finds.

Sapra has actually coming to being a DJ from an unusual path. He has a degree from NYU, where he graduated in 2007 and oversaw 400 employees at an industrial supply company for five years after college.   He moved into working with a tech startup and focusing on his music.   As he recounted, “I just wanted to do one indie dance party once a month, but it just started to snowball.”

And now the Democratic National Convention will benefit from his expertise.