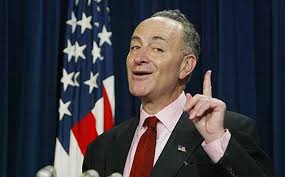 That might all change as Mayor of New York, Bill de Blasio announced on Friday that Brooklyn, more specifically Barclay’s Center, will apply for the honor of hosting the DNC in 2016.

“The progressive spirit of New York City has never been stronger or more vibrant than it is today” the mayor said. “We believe that this spirit can energize and captivate both the Democratic Party and the nation.”

“Brooklyn’s new Barclays Center is the perfect spot for the Democratic National Convention – and not just because it’s in my home borough and I could walk there from my house” New York Senator Chuck Schumer said. “New York City is the center of the media universe, home to a diverse population from every state in our union, and is the cultural capital of the world, making it the ideal setting for the Democratic Party’s Convention. The venue sits atop a treasure trove of transportation options that can whisk attendees to and from the Big Apple’s limitless attractions and hotels. I couldn’t be more excited that New York City submitted their bid to make Barclays in Brooklyn the host of the 2016 Democratic National Convention.”