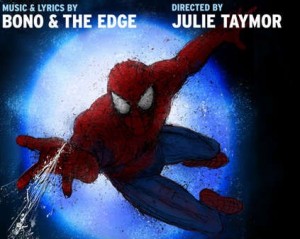 On Monday night, Christopher Tierney, a stunt double on the new Broadway musical “Spiderman: Turn Off the Dark” fell thirty feet despite a safety harness that should have prevented the accident. Tierney was scheduled for back surgery on Wednesday.

Following the accident, the producers agreed to new safety precautions which were approved by the state Department of Labor. The $65 million production was created by Julie Taymor of The Lion King, and songwriters Bono and The Edge of U2. The show is the most expensive in the history of Broadway, and has been burdened with technical problems, money issues and three other injuries. It has been in previews for months, and its official opening has been postponed twice already. Now, it is scheduled for early February.

The postponement of Wednesday night’s sold-out show was announced mere hours before showtime, and many only learned of it with their arrival for the show. Emotions ranged from disappointment to concern. Many Broadway actors have expressed their concerns as well. “Perhaps they should have thought twice about what some of these stunts were. It’s not like doing a stunt in a movie” said Marc Kudisch.   Adam Pascal, who also experienced a fall during his Broadway career, tweeted that Taymor “should be charged with assault.” He later said he was joking, but that the show shouldn’t continue until the safety issues are properly dealt with.