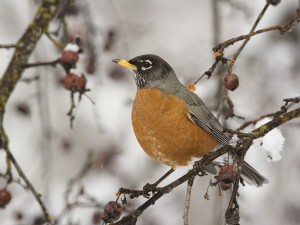 Western New York’s frigid winters are especially tough on wildlife, often resulting in hibernation or migration. Still, certain animals, like the American Robin, choose to remain in the region despite the cold, making it a breathtaking place for winter bird watching.

Connie Adams, a Senior Wildlife Biologist for the New York Department of Environmental Conservation, explained why migration is not always the best option.

“Migration is a very dangerous thing” she said, “and if they can survive the winter without migrating, there’s food here, and our winters have been getting milder, then it is actually advantageous for them to stay. This is because when spring does arrive, they are the first ones on the breeding territories.”

For robins and other animals, the main factor for surviving a winter is food. Many species make adjustments to their diets as the seasons change. Robins usually live on insects, but the winter months provide them with leftover summer fruit. Niagra County is especially rich in food options for winter birds.

Adams added: “There’s lots of apples and pears and peaches that are grown, and the drops that are left by many other mammals, deer, and they have been unpicked, provide a food source for these robins all winter long.”

Other interesting visitors to the region include Snowy Owls and Bonaparte’s Gulls from the Arctic. The gulls are small, fleeting birds founds in huge flocks during winter months. According to Jim Landau of the Buffalo Ornithological Society, “They’re fish eaters, the Nigara River stays open year round, they feed on these little guys called Emerald Shiners or Smelt, or those kind of bait fish, and you see them in great numbers on the Niagara River.”

The flocks have been compared to watching an aerial ballet. “I’m talking thousands and thousands of them, and they’re a glorious sight to see! They’re just a nature’s wonder to watch them feeding and wheeling around, and diving, and they have a beautiful little call. They’re very pretty to see.”

On the other hand, the snowy owls travel alone, or in very small groups. Hawk Creek Wildlife Center’s Tanya Lowe said: “The best way to describe a snowy owl is that they are a powerhouse. They are built to live in an extremely harsh environment. They have feathering all the way down their toes, and live and breed in the Arctic, so it is an extremely powerful animal.”

Lowe said, “A lot of people don’t realize it, but we have such a rich diversity of animals in our area, and a lot of people unfortunately don’t see that.”