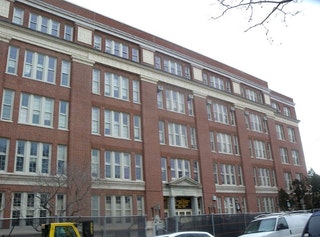 It is impossible to know how much of an effect, if any, these individuals’ success can be attributed to the high school they attended. Perhaps they would have succeeded no matter where they went to high school. However, it stands to reason that there is something about the school that helped these extraordinary people reach their goals.

It wasn’t a longer school day. In the 50s the school was so crowded that 9th and 10th graders attended classes in the afternoons and juniors and seniors went in the mornings, leaving at noon to make way for the next shift of younger students.

It wasn’t small classes, either. One graduate recalled classes so crowded that some students were forced to share chairs or sit on radiators and windowsills. And space in general was at a premium. During the 1930s the school was so crowded that the freshmen studied in an “annex” located at a nearby Reform synagogue, Temple Ahavat Sholom.

Madison was not a “magnet” school, drawing self-selected talented students from all over the city. It was the local high school that drew its population exclusively from the neighborhood. And the neighborhood was not a wealthy one, either. The demographics of the area in the 40s, 50s, and 60s was that of middle and lower-middle class with many immigrants, especially Jewish.

And now we are getting to what most likely did influence the students to excel. The students came from homes were education was of extreme importance. In the eyes of these parents nothing was more important than a person’s education.

Teachers were also part of the equation of success. Baruch Blumberg, Nobel Laureate in medicine, said in a video interview that the school had “extremely high academic standards.” He explained that the Great Depression of the 30s forced a number of college-level teachers to work in high schools. “Many of our teachers would have in other times taught at university. Quite a few of them had Ph.D.’ Our chemistry teacher in high school had a doctoral degree, had done research, was really a wonderful teacher as well,” Blumberg said.

The fact that the school is in New York City added to the diversity of the teachers. Many of them had second careers as musicians and writers.
Other graduates of Madison include historian Robert Dallek, Judge Judy Sheindlin of television fame, and singer-songwriter Carole King.

Unfortunately, the success of Madison’s students has been in decline. Graduates from the 60s, 70s, 80s and 90s seem to be less in the limelight than their fellow older graduates. In the late 60s huge changes to New York City in general and the city’s high school-assignment policies in particular went into effect. Did this cause the decline? We can never know for sure. But what is sure is Madison has produced an amazing group of high achieving people who gave and are still giving to the society from which they sprang.