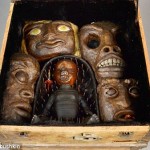 You simply never know what people are hiding in their closets. In recent news, auctioneers who were clearing out the attic in the historic Steinway Mansion in New York found a skeleton in the closet, quite literally. They discovered a box filled with a voodoo doll and eerie masks.

As auctioneer Michael Capo explained, ‘It was eerie. We broke the lock and inside we found five voodoo masks and a doll surrounded by rusty nails in a little coffin. I don’t know if the masks are made out of wax, pigskin or even real skin.”

History of the Steinway Mansion

The 27 room home was built by Benjamin T. Pike Jr. in 1858. The original owners sold the property to the Steinway family, makers of the famous pianos, in 1873. The most recent owner, Michael Halberian, lived there for 82 years and recent passed away in December. 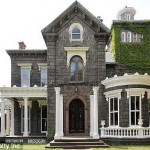 The Halberians don’t think that one of their relatives would have owned these bizarre findings. They speculate that they’ve probably been hiding since the late 19th century. Whoever owned and used them, they certainly spooked the auctioneers as auctioneer Michael Capo explained, “This thing has some energy, and I am not sure that it’s good energy. Everyone went silent. We are professionals, but nobody wants to go near this thing. Clearly, somebody used this in some sort of ceremony, because there’s a mirror inside the lid so the image could be reflected to others in the room.”