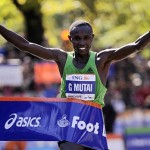 The famous New York City Marathon took place again this weekend, to a smashing win by Geoffrey Mutai of Kapng’etuny, Kenya. Leading a massive pack of 47,438 runners, Geoffrey Mutai won the 42nd marathon with a time of 2 hours, 5 minutes and 6 seconds.

Modestly, he replied after his win,

Interestingly, the marathon running paces have increased so much recently that all five of the world’s marquee marathons had new course records set this year. Those locations include Boston, London, Berlin, Chicago and New York. Geoffrey Mutai set two of those, coming in first in the Boston Marathon in April when he managed to run an astounding 2:03:02.