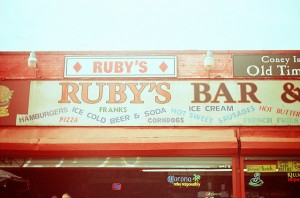 Almost as old as the boardwalk itself, Ruby’s has just finished a major face-lift which was part of the deal which allowed the 77-year old bar to remain in place as Coney Island gentrifies.

Surviving the slash and burn policy of the new owners of the world-famous amusement park was not easy. Ruby’s co-owner Michael Sarrel had to jump through several hoops to be allowed to remain as one of only a handful of old-time businesses given leases by the new landlord Zamperla USA.

Ruby’s owners spent over $200,000 renovating, gutting the old premises and adding a distinctive look; incorporated into the new bar’s dÃ©cor are 1,700 square feet of tropical wood planks taken from the 89-year old boardwalk. The planks were discarded as the boardwalk itself is having its own makeover; in place of the old wooden planks concrete and plastic boards are being installed by the city despite the protests and outcry of local preservationists.

Sarrel used the old wooden boards to build a fabulous new bar counter as well as placing them strategically on the walls and ceiling. The interior gives the distinct feeling that patrons are “under the boardwalk.” In addition Ruby’s famously frightening bathrooms also now have boardwalk ceilings, and are usable, too.

“We went through a nightmare to return this season, but we’re back, and hoping people will embrace our new look” said Sarrel.

Zamperla USA awarded Ruby’s a new eight-year lease only after they agreed that the “dive” bar re-brand to a more upscale model to match the look and feel that Zamperla wants throughout the new Coney Island. Ruby’s had to install air-conditioning and even a heating system so they can stay open throughout the year, and not just the busy summer season. Ruby’s is planning on showing football games throughout the fall.

Loyal customers of Ruby’s need not fear that the cuisine will change. Despite a beefed up and modernized kitchen, the bar-food menu will for the most part remain as before. Also left alone are the numerous photos of Coney Island which have hung on the walls for decades, depicting Coney Island in its heyday. Perhaps a new heyday is in store for Coney Island, without losing all of the charm that made this unique amusement park special in the first place.

“For me, the biggest challenge was keeping Ruby’s identity, and I think we succeeded” said Brooklyn’s Eric Safyan, the project’s architect.