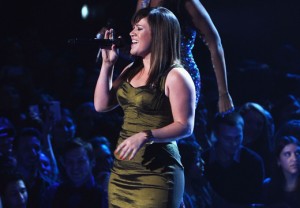 Clarkson appeared for her show with her right foot wrapped in a bandage, but performed flawlessly and obviously enjoyed the show despite the pain. The “Break Away” singer said she was honored to participate in such an event, and later explained the injury on Twitter, writing:

“Just finished taping Divas for VH1 and seriously there are some really talented ladies… Funny part of the evening is I twisted my ankle in a pair of heels right before the show started in a freakin pot hole on the street! Hurt like hell but still one of my favorite shows I’ve ever been a part of!”

Some other stars were included in the gig as well, with performances by Chaka Khan, Erykah Badu, and British stars Florence Welch and Jessie J. There was also a tribute to the late soul singer Amy Winehouse. The show will be aired on Monday of next week.