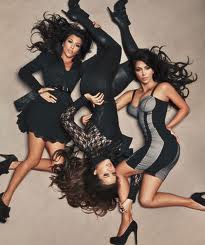 For Kardashian bashers, it offers some perverse pleasure to hear that Sears and Kmart are closing some stores, only because the Kardashian Kollection is part of this story.  Sears and their sister franchise Kmart have announced that, due to very slow sales during the Christmas season, they are closing up to 120 of their stores.  It’s possible that these stores will come from the New York area, as there are four Sears stores in New York, including those in Brooklyn and Staten Island; there are also four Kmart stores in the area.

Sears has reported a 6% decline in sales in the eight weeks leading up to Christmas Day. Perhaps people were avoiding the outlandishly obnoxious images of those Kardashian sisters at the Kmart and Sears stores? Perhaps they have had enough of the Kardashian Kollection that has made its way into the racks this year?

Perhaps not.  Interestingly, online shopping with mobile devices saw quite an upsurge this year, with a 16.4% boost in last-minute online sales on Christmas Day from iPads, iPhones and Android devices, according to IBM Benchmark.

Other Stores Coming Out Ahead

According to the National Retail Federation, sales at Target and Kohls (where the Kardashians do not have collections), were expected to rise at least 3% from last year.

Even though they’ve taken quite a hit, Sears Holdings insists that they are not on the brink of bankruptcy.  We’ll have to see if the New York stores are some of the ones that are closing. Unfortunately, it’s safe to say that the Kardashians are not crying, or hurting economically, from this blip.  Oh well…it’s fun to dream.