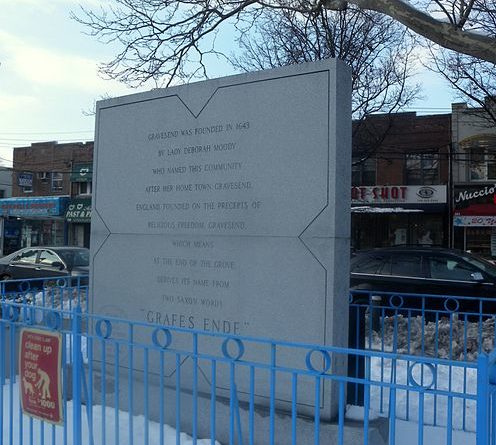 Brooklyn’s history is full of surprises. Did you know that what we call Gravesend in the southern part of Brooklyn is one of oldest planned communities established in North America?

Founded in 1643 by Lady Deborah Moody, Gravesend was created on land granted her by the Dutch colonizer and director-general of New Amsterdam, William Kieft. (Perhaps it is proper to mention the Kieft came into possession of this land through multiple genocides of the native people who had lived on the land for hundreds, if not thousands of years before his arrival.)

Lady Deborah was a wealthy widow of an English baronet. As an Anabaptist living in a Puritan-led colony, which practiced infant baptism, she ran away from Massachusetts due to her unyielding opposition to infant baptism which the Puritans practiced.

She was the first woman in the New World to be awarded a land grant, which was for a huge parcel of land in Brooklyn with access to the Atlantic Ocean. Lady Deborah divided a 16-acre part of her land into four equal quadrants with the center at the intersection of Gravesend Avenue and Gravesend Neck Road. (Gravesend Avenue has since been named McDonald Avenue.)

Thomas Campanella, a planning historian, explained that Gravesend was the second village in the English colonies to be laid out in an orthogonal manner, and the first which included a regular dispersal of public open space within the grid. The original use of that public space was a refuge for animals.

The most easily seen remnant of the early settlement is the cemetery in the southwest quadrant. The earliest record of the cemetery is from 1658. The first map of the area which includes the cemetery is from 1873, which can be seen in the Atlas of Long Island, New York.
In 1875 the Prospect Park and Coney Island Railroad opened on Gravesend Avenue. In 1894 Gravesend was incorporated into the City of Brooklyn. New York and Brooklyn soon merged with western Queens and Staten Island, in 1898.

Today it is still possible to go back Gravesend and visit the almost 400-year-old settlement that made history.